Now off to the capital of Bolivia. For just 25 BOB (3.65 USD) you get a ticket for a bus from Copacabana to the capital la Paz. People in the agencies will try to tell you that there are only three buses leaving daily but buses leave frequently. Apparently most travelers believe the hotels and agencies because we left for la Paz very early in the morning and we were the only two tourists on the bus. After about an hour we had to set over Titicaca, so we bought a ticket for 2BOB (0.29 USD) and took a boat to cross the lake. The bus followed us inconspicuously and separately as you can see on the pic below. Then another 2 hours more and we were already in la Paz. 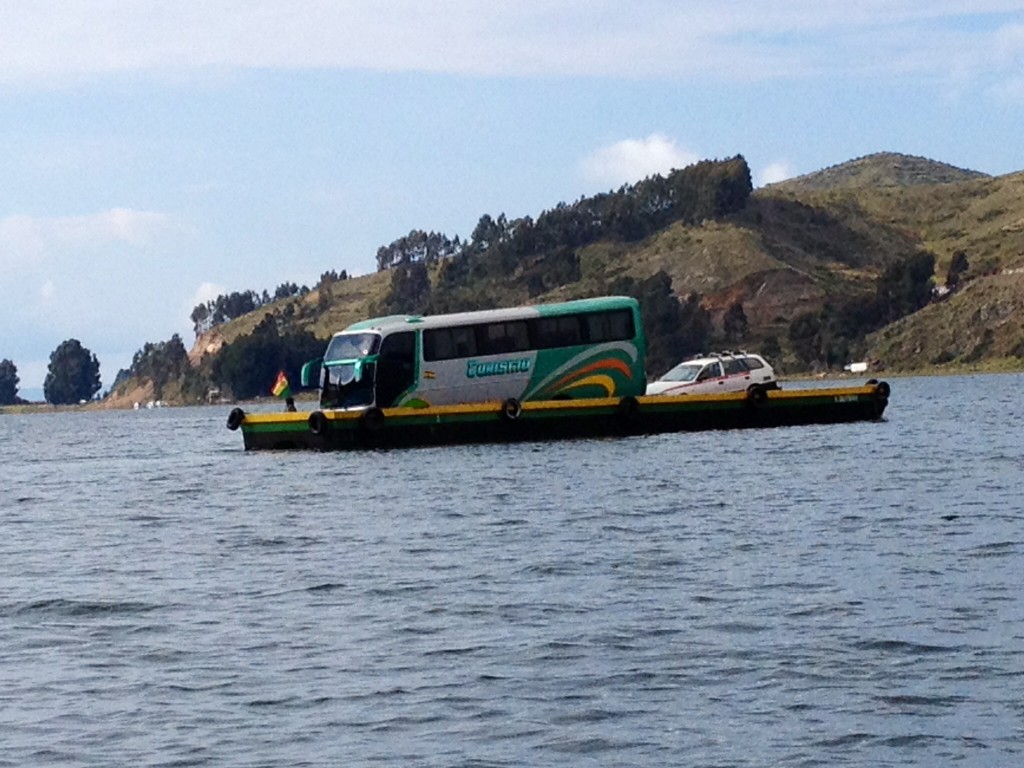 As it turned out finding a place to stay in La Paz is more difficult than it might seem at least if you are on a budget and don’t want to spend too much dinero.
So we were looking for a hostel between Plaza de San Francisco, the teleferico and the bus terminal and as it turned out most of the hotels were either fully booked, some too expensive and some of the owners or administrators were plain assholes (excuse me for my language).

But this is what we noticed immediately in la Paz. People in this city are not exactly the care bears as there is a significant amount of unfriendly idiots walking around. Once I asked a woman about the ingredients of a juice which was standing in front of her and she said if I am not going to buy it she won’t tell me and I should keep going. Same happened in a hotel when I asked to see a room. The answer was the same if I don’t take the room he won’t show me. Another thing you will notice once  in La Paz is that the city is full of shoe blackers, so apparently the inhabitants of La Paz like their shoes shiny. The shoe blackers look a little intimidating due to the ski masks they are wearing. The reason for this is that they do not want to be recognized by family and friends as shoe blackers count as lowest class in Bolivia. The shoe blackers have the reputation of being drug addicts and thieves.

Finally we found a place to sleep for just 30 BOB (4.37 USD) per night for a single room. The owners were the first polite people we met and rooms were very good for that price. Obviously there was no wifi but the building was pretty cool and probably old as the world itself.
As I had for once no idea about the city we were, I was positively surprised by la Paz and it’s pretty sweet city center.
Wandering through the city is quite fun and interesting.
But in a big city like la Paz there are obviously things that one wouldn’t like too much too. For instance the incredibly annoying traffic, the food, but this is something I have to deal with in wide parts of South America as if I live entirely of meat, I’m afraid I will turn into a cow one day myself, but i am sure for all the hardcore meat-eaters it will be paradise and a significant amount of idiots making ones journey a little bit more unpleasant as it should be . But that shouldn’t be things that keep you from having a great time in La Paz.

Once we wanted to get to a vegetarian restaurant but karma wanted it to be closed, so we ended up in exactly the opposite kind of place than we hoped for. Our cap driver recommended us a parrillada (basically a huge meat orgy).
The waiter delivered us a little table grill with meat of each animal that exists in this world and their intestines. It tasted quite delicious for the first kilo that we inhaled as we were starving but after finishing off half the mountain of beef, chicken, pork and different sausages, I felt so dirty that I had to wash my mouth with a liter of coke and a pack of smokes and later a long shower. Still the next morning I had the feeling I was sweating like a pig or even I was still sweating pork meat out of my pors. I do not know  if my psyche will ever fully recover from that night.

Anyway for everyone who is interested in that bloodfest it was available for 100BOB (14.57 USD) for two persons including several side dishes and drinks. Just ask the cap driver you want to eat a huge slaughterhouse plate and he will most likely find you a nice place for a great food massacre.

Other things that we did in la Paz apart from going to the slaughterhouse were the witch market, which was highly disappointing as it was very small and besides a few goat and sheep cadavers there was not much too see and we also went up the teleferico for 3 BOB (0.43 USD). From up there you can enjoy a great view over the city of la Paz even better when the sun is shining I guess.

Our daily highlight in la Paz were these small cafés, juice and sandwich booths within the centro commercial next to San Francisco. These booths are entirely owned by woman mostly elderly and you can have very cheap beverages, juices and sandwiches along the atmosphere of being in grandmas kitchen a 100 years ago. Also I have to say the grannies were very friendly compared to the rest who tried to sell something or not try to sell something in la Paz (we never really figured out what they tried or not). Read the next entry about potosi and our way there I can already assure you it is going to be interesting, a little funny and even sad. So basically a cool version of a romantic comedy main actors me, Christian, two bus drivers and a bag. Side actor is going to be a bus.