Cabo de La Vela is located in the department of La Guajira, in the Municipio Uribia far up north of Colombia on the Caribbean coast. The inhabitants of this area originate mainly from the people of the Wayúu, which call this place also Jepirra.

Punta Gallinas is the most northern point on the mainland of South America.

The area that abuts with Venezuela is surrounded by the La Guajira Desert. It happens quite often that there is water shortage as it can be that it doesn’t rain in this area for several months. 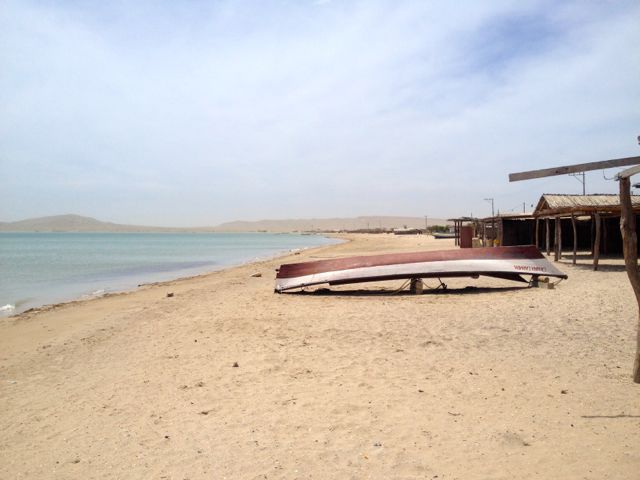 How to get there?

There are different ways to get to Cabo de La Vela. The first one which is definitely the rather complicated one is to make the trip on your own. Unfortunately you cannot just hop on a bus sleep for a few hours and arrive at the beautiful Caribbean Sea surrounded by desert and enjoy the beautiful dunes of Punta Gallinas. As I am a little adventurous and I also thought that I might be able to save some money I decided to go for this option.

At first I took a cap from Palomino to the next bus stop (30 minutes) for 3,000 COP. There I hopped on to the bus to Riohacha. Probably the bus passes as well in Palomino but I didn’t know that at that time.

The bus ride to Riohacha took 2 hours and cost me 12.000 COP. After the arrival in Riohacha I was referred to a Colectivo (Shared Taxi) which took another 30 minutes just to drop me a a crossroad which is called Quatro Vias in the middle of nowhere. The prize for the ride was 4,000 COP. Apart from a few little huts selling grilled meat and Empanadas there is basically nothing around but dust and sand.

After asking around the people waiting there I figured out that from there I had to take another Colectivo that would take me to Uribia. I only waited for one hour in the burning sun until we had finally enough passengers to head to Uribia. Squashed up between 2 Colombian beauties and some chickens I know headed to Uribia in a fortunately acclimatised cap. This taxi cost me another 8.000 COP.

The next day I took a bike taxi to the market place where the off-road pick up trucks to Cabo de La vela leave. The cars were supposed to leave at 8 am but when I arrived at 8 people were still packing the jeeps with rice and other groceries that will be delivered to the people living in the desert. So I kept on waiting for almost two hours in the heat at the buzzing market place until the Pick up trucks were finally fully loaded.

And then finally the trip started. Together with some locals and once again plenty chicken on board the trip eventually started. After 2 hours and several stops in the desert later the very interesting drive on the bumpy desert ground ended.

The price for this little adventure is 15.000 COP

The easier but also more expensive way to enjoy this adventure is to simply book a tour. In Riohacha or even in the hostels of Palomino, where I came from, you can book an organised tour to Punta Gallinas and Cabo de la Vela. You can also start the Tour from basically any agreed meeting point near to Santa Marta. A Tour usually takes between 2 and 4 days depending on what you choose. A 3 day Tour will cost you around $450.000. The Tour will bring you to Manaure where you will see how salt is processed which is a very important resource in this area and then you will head to Uribia. Afterwards you will head to Cabo de La Vela and the Arco iris Beach, Pilón de Azúcar and the lighthouse. After spending the 2nd day at Punta Gallinas you will visit the Taroa Dunes on the 3rd day and then head back to Riohacha 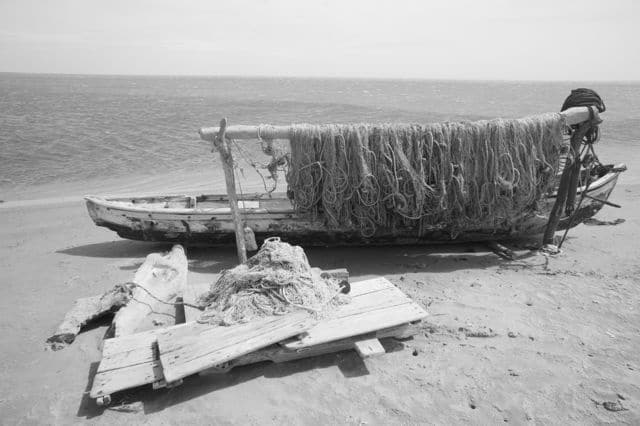 Finally in Uribia I decided to spent the night in the city in a lovely Hotel called Juyasirain that looked like it was built in the 80s by an Colombian drug lord and it had the atmosphere of the bates motel. But as choices are only a few in Uribia you take what you get and the price of 50.000 COP for a double bedroom with air condition and 40.000 COP for a room with a fan seemed pretty much OK. If you want to have a look at the place click here

Accommodation is very simple so don’t expect a lot of comfort. You can either choose a small cabana for 15,000 COP or a hammock for 8,000 COP. Prices obviously differ a little depending on the “Hostel”. Also don’t be surprised if you don’t have running water in your accommodation. For a shower a few boys had to get me water from the well but that might also have been due to the drought at this time 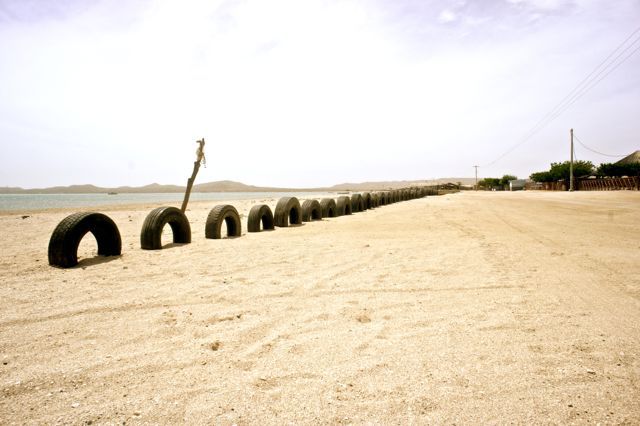 What to do in Cabo de la Vela?

In Cabo de La vela there is basically nothing to do and not much to see and that’s the beauty of it. When there is no peak season the place looks rather like a ghost village from a western movie. But for people who enjoy the quiet, the beautiful crystal clear Caribbean Sea and an amazing starry sky this place is just perfect. On the kilometres long beaches you can apart from sun bathing and swimming, go kite surfing. The place is just perfect for kite surfers due to its constant wind. There is even a little kite surfing school for the ones that like to learn the sport. Compared to the rather rough sea in Palomino or even Tayrona the water here is rather calm. Also ask the locals to show you the beaches around and make sure you climb up the Cerro Kamachi for a great view

Surrounded is Cabo de La Vela by nothing more than dust, cactuses and maybe every now and then a tree. This now seems a little forlorn but it is indeed an amazingly beautiful and quiet place with a very specific atmosphere.

Do not miss out on eating Lobster! Lobster is incredibly cheap, so cheap that even though I had just overcome a food intoxication I had to eat two. The smaller Lobsters start with a price of 20,000 COP which is hardly as much as a Big Mac Menu. Where accommodation and Lobster is cheap, the water is crystal clear and the sky is full of stars then this can definitely not be a bad place to spent some time. 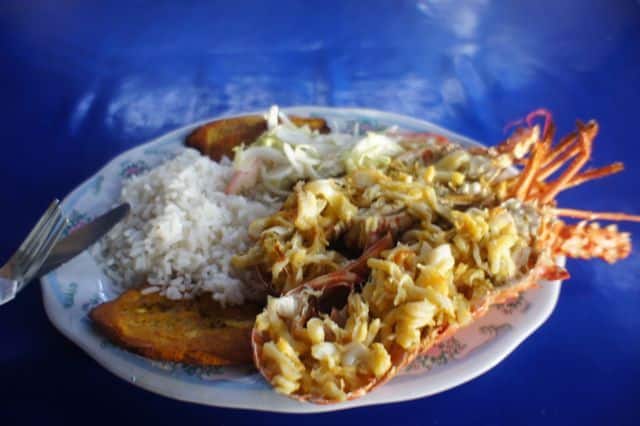 From Cabo de La vela you can make daily trip to Punta Gallinas. In order to get to Punta Gallinas you will have to take one of the off roaders for 15.000 Pesos. You will then visit the „Faro de Punta Gallinas“ the most northern point of the continent. The desert landscape around is simply stunning. After enjoying the incredible views here you will head to another highlight before going back to the village. The Taroa dune is another beautiful place to see. Jumping dunes was already one of my favourite things to do when I was a kid. The dunes will be the last stop before you head back to the village.

Visit the Salt mine in Manaure

Another thing to see in the area is the salt mine where you can see how the salt is processed. Salt is a very important resource in this area.

As a souvenir get a typical mochila (backpack) or hammock made by the Wayhuu which are also sold over entire Colombia.

On my German Blog about Colombia I often receive question if it is worth to visit La Guajira? Yes, it is definitely worth it La Guajira is huge. Palomino one of my favourite beach destinations in Colombia is located in La Guajira. The interesting thing is that there the landscape is completely different than in Riohacha and Cabo de La Vela. The area surrounding Palomino is green and rather jungle like with the Sierra Neva in the background the further you drive up La Guajira the drier and scantier it gets. It is very interesting that the nature changes massively from entirely green to desert within of just a few hours drive. But as I mentioned before the atmosphere in the desert of la Guajira is something very special for me the trip to Cabo de la Vela was one of my favourite experiences in Colombia. Maybe this was also because I made the trip completely by myself and without a tour.

Since my first time in the desert I have the strong urge to go back to this place, relax in a hammock, eat lobster, swim and watch the stars.