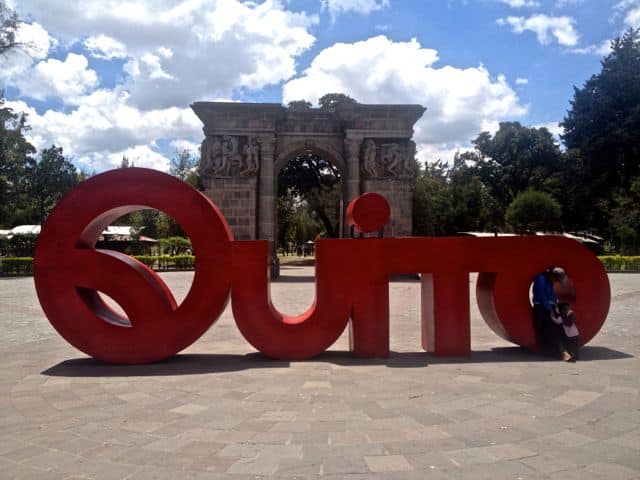 Quito is the capital of Ecuador and a UNESCO Heritage Site. The city is situated at 2850m and therefore one of the highest capitals in the world. I once read in a blog that Quito is not one of the nicest or even safest cities in South America. For me however this statement is completely irrelevant as I see it the other way around. Quito for me, with its many public parks which are not being locked like in other South American cities, the many green spaces and the beautiful historic city center, is one of the prettiest and safest cities in Latin America.

However, this might only be my personal impression as I have been living in South America for 2 years already and have been getting used to the circumstances here. It is therefore more difficult for me to objectively assess this than for a tourist who just arrived from his cozy quarter in Europe. Nevertheless I believe that everyone with a healthy common sense and who sticks to certain behavioral rules should not encounter any problems here.

But back to the topic, the many colonial buildings and the friendliness of the Ecuadorian people gives the city an incredible charm. In addition, Quito is rather cheap for both accommodation as well as provisions. For just a few dollars you can enjoy excellent Ecuadorian, Chinese, Indian and other cuisines.

Sightseeing in and around Quito:

No-one should miss out on a walk through the Old Town Quito’s, with its old colonial buildings. You can walk from La Mariscal to the Plaza Mayor and pass the Parque EL Ejido, where you can relax for a few minutes on a nice day. The Iglesia La Basílica de Quito is also on the way into the city center. For just 2 Dollars you can visit the basilica where you can enjoy an extraordinary view from its turrets over Quito.

Other attractions of the Old Town are the Plaza Grande (also known as Plaza de la independencia) or the Plaza de San Franzisco.

El Pannecillo is at 2800m where you can enjoy the view over Quito. You can get there either with the Bus or, probably best, via cab.

One of the attractions in Quito is the Teleférico, a cable car that goes from the Volcán Pichincha to the top of Cruz Loma at 4270m. From that point you have a magnificent view over Quito. However, you should adjust to the altitude in Quito first as the air is rather thin up there and some people got altitude-sick.

The market of Otavalo has many things to offer, from handmade Alpaca scarfs and ponchos to the big animal market (which in my opinion is nothing for animal lovers). Here you can also have a Menu Ejecutivo for lunch for just a few dollars. But you shouldn’t be surprised to find the occasional chicken feet in your soup.

The centre of the Earth can be found approximately 20km north from Quito. A line as well as a monument is marking the Equator. La Mitad del Mundo is a popular tourist destination. From there on you can, weather permitting, book tours to the volcano Pululahua. We were unfortunately unlucky with the weather though.

Many tour operators and hostels offer trips to Quilotoa. The laguna de Quilotoa is a lake in a volcano crater and reminds of the James Bond movie ”You only live twice”. Those visiting Quito should not miss the “laguna de Quilotoa”. After having gone down into the crater, the ascent is quite taxing though but you can also rent a horse to take you back up again.

The Cotopaxi is one of the highest active volcanoes in the world and the second highest mountain of Ecuador. If you dare it, you can climb Cotopaxi. However this is more for fit people and not lazy people like me.